Social norms characterise the social glue that makes the coordination and cooperation amongst individuals work. Rules have no effect without the social norms that shape and accommodate them. An example is corruption: While most countries have rules against corruption, the prevalent norms are conflicting and overruling the legal perspective in many contexts. And while rules may be adapted infrequently, norms underlie a constant flux based on their interpretation and changing environmental circumstances.

To better understand, operationalise, and foremostly analyse normative dynamics, a coherent description of norm dynamics is thus necessary, which have been reflected in various norm life cycle conceptions (e.g., Finnemore and Sikkink (1998), Savarimuthu and Cranefield (2009; 2011), Hollander and Wu (2011), Mahmoud et al. (2014)), as visualised schematically in the following and discussed in Frantz and Pigozzi (2018). 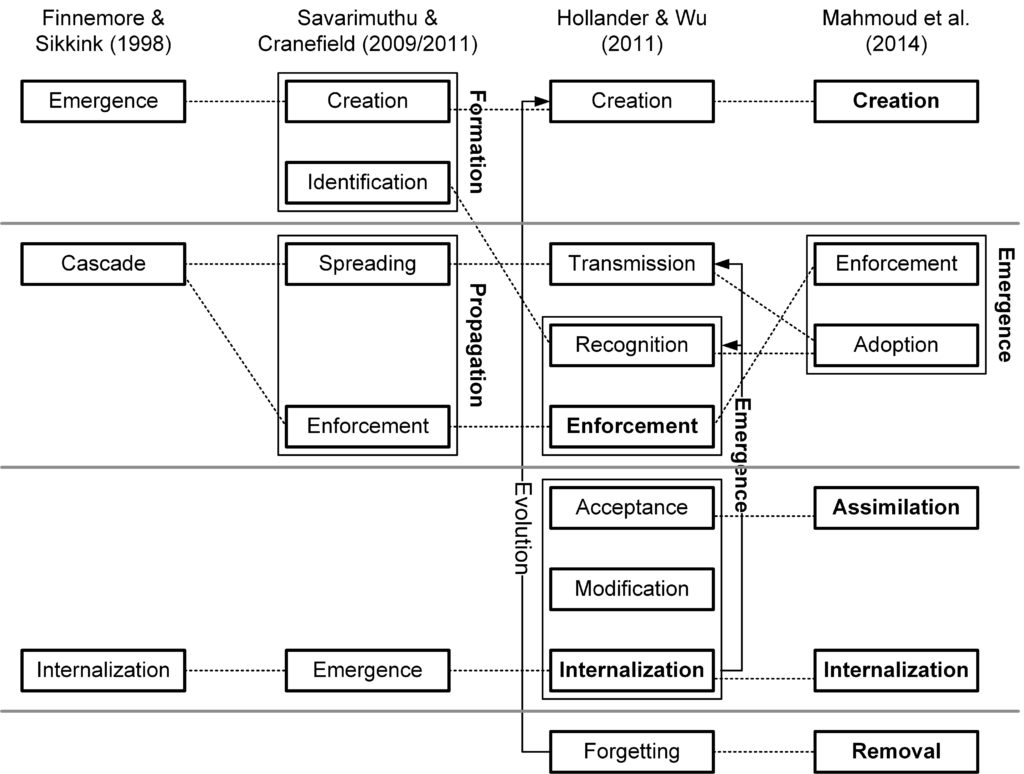 As part of a comprehensive review of existing norm life cycles in the multi-agent systems literature, we have a developed a synthesised general norm life cycle that integrates shared patterns of the existing life cycle models, resolves ambiguities and fills conceptual gaps. We provide a condensed description of the model below. (For details, see p. 522 onwards in C. K. Frantz and G. Pigozzi (2018): Modelling Norm Dynamics in Multi-Agent Systems, Journal of Applied Logics – IfCoLoG Journal of Logics and their Applications, vol. 5, no. 2, pp. 491-564 [PDF]).

It fundamentally identifies six essential processes in the life cycle of a norm (as shown in the figure below), namely Creation, Transmission, Identification, Internalisation, Enforcement, and Forgetting, which we discuss in the following. Additionally, the model characterises the macro-level phenomena of Norm Emergence and Norm Evolution.

The inception of a norm can either occur based on Creation, i.e., explicit specification of a formal rule (e.g., prohibition of smoking in public) that requires the inception of a new social norm that accommodates this rule. Alternatively, norms may well exist but their creation may be unknown to the observer. In this case norms are only observed once socially entrenched, in which case the individual only becomes aware of a norm by identifying it (e.g., travelling to a new country, observing the “local ways” and identifying behavioural patterns).

Whether created intentionally or identified by observation, in order to be adopted norms need to be transmitted. This can occur in passive way (e.g., by following norms in the public space, such as not littering or waiting in front of red lights) that makes such norms observable and accessible to social learning. Alternatively, norms can be transmitted in an active way, such as communication (e.g., telling someone else about tipping behaviour in a given country) or enforcement/punishment (e.g., being scolding for not tipping when expected).

Independent of the observation and identification of a norm, the process of internalisation involves the integration of the new normative content with the existing individual’s normative understanding. This may involve the adjustment of the norm (e.g., by subjective interpretation), the normative understanding (e.g., existing internalised norms), or rejection of the norm (the fact that a norm can be identified does not necessarily mean that an individual accepts and follows it). However, individuals may even internalise norms they do not follow (i.e., having an internalised understanding of the functioning of a norm). The existence of sociopaths is an illustrative example in this context.

To facilitate its emergence, the internalised norm is then enforced in some way, which may include self-directed enforcement that addressed oneself (e.g., adherence to etiquettes) and leads to personal reinforcement, or socialised external enforcement which is targeted at other individuals (e.g., bystanders’ scolding of jaywalkers). External enforcement implicitly feeds back into the transmission process that leads to further spread of the norm.

However, norms do not only emerge and are reinforced (whether internally or externally), they can also decay and be substituted by norms that are better geared at addressing situational context. This process can be characterised as forgetting.

In addition to those fundamental processes exist meta processes, that capture the dynamics of the operation of the fundamental processes and can be understood as macro-level phenomena arising from the operation of these underlying processes. Those include norm emergence, that is, the recurrent identification, internalisation and socialisation (transmission/enforcement) of norms leads to its penetration of the social environment (e.g., group, society at large). Looking at the long-term perspective, the salience of norms can change based on their relevance, which is expressed as variation of norm reinforcement (as expressed in the emergence meta process). This process of norm evolution can involve the evolution of norms (e.g., change and adaptation over time), and they could either evolve (e.g., are used in different contexts detached from the original meaning – think about the English idiom “cutting to the chase”), or simply be forgotten (Example: a norm of unlocked house doors is abandoned in the light of increasing crime). 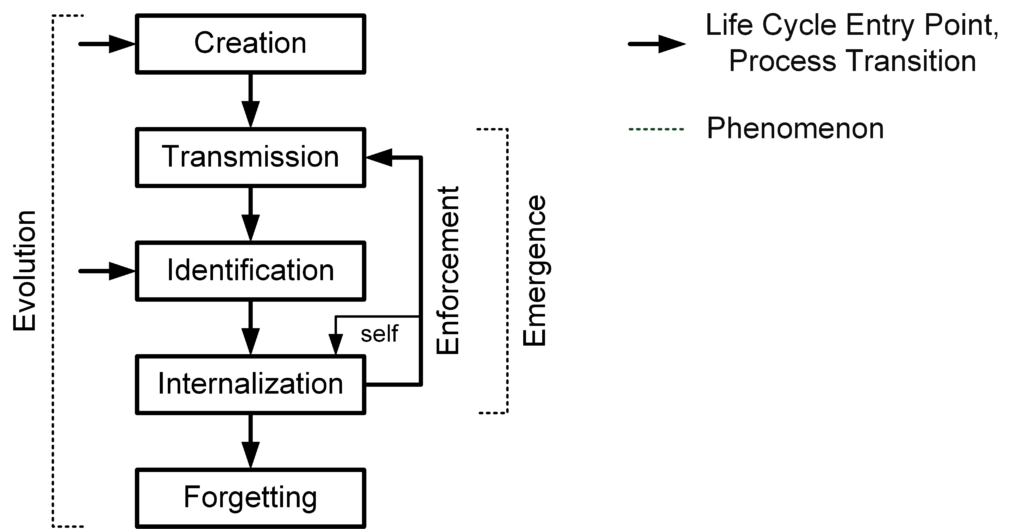 One of the core aspects of delineating a general norm life cycle is to reflect the potential dynamics that norms underlie. This can relate to to the salience of a norm, its spread, but also its change in normative content. Specifically with respect to the latter aspect, the dynamics of norms can either be explicit based on intentional modification of an internalised norm before socialising (i.e., enforcing) it. Independent of this, norms will be modified unintentionally during different norm life cycle processes. For example, during norm transmission information can be lost or erroneous information be introduced. During identification, sensory biases or constraints of the individual may affect the internal representation of the norm. When (and if) internalising the norm, cognitive biases, intentional modification (i.e., reinterpretation) may further lead to modification. In the context of enforcement, finally, the choice of enforcement, characteristics of enforcer(s) and relationship between enforcer and enforcement target can affect the normative content.  The table below summarises these key sources of modification in the life cycle process.

Observing the specified processes, one can find that some of those operate on the individual level and are concerned with the norm representation on the micro level, whereas other concentrate on the spread and diffusion of norms in the social environment (meso/macro level). The associated processes can thus be characterised as either related to Identification (Identification, Internalisation, Forgetting) or Emergence (Enforcement and Transmission), as shown in the figure below. This is in alignment with the differing objectives, which involve the representation of norms, the processing of conflicting norms as well as their priorisation in the context of Identification, referred to as Norm Synthesis. In the context of Norm Emergence, the prevalent theme is the rate of diffusion, emerging network structures and norm convergence. For a comprehensive overview of contributions to both fields, please have a look at Pages 516 and 546 of Frantz and Pigozzi (2018). 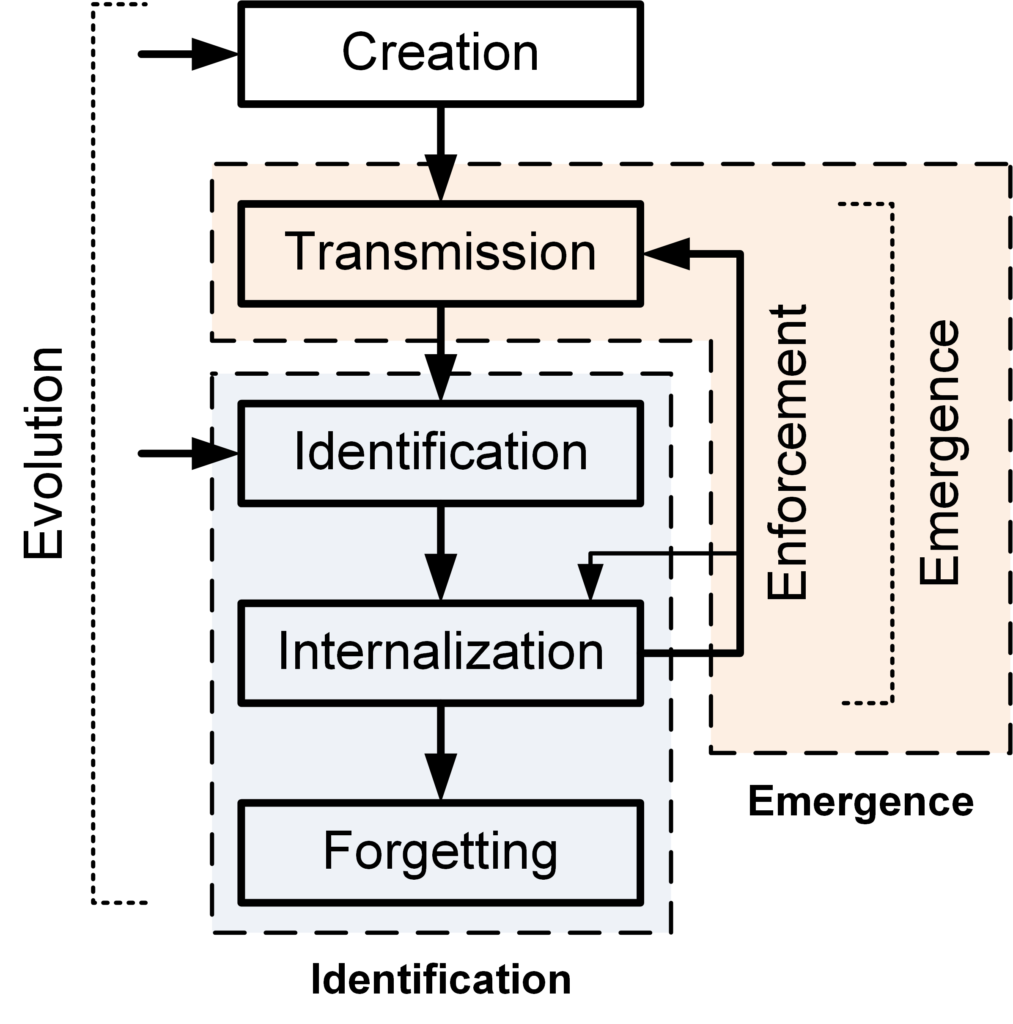